A quote from the Chairman

“Good corporate governance practice is an important ingredient in creating and sustaining shareholder value, and ensuring that behaviour is ethical, legal and transparent.”
Barclays Group Chairman Marcus Agius
Please follow the link below:
http://www.youtube.com/watch?v=WBpe0Ph-Gr4
Do you believe the banks behaviour is 'ethical, legal and transparent'?
We don't
Posted by Barclay's: not a great home for my savings! at 15:24 3 comments:

Letters to the Chairman

Email ThisBlogThis!Share to TwitterShare to FacebookShare to Pinterest
Posted by Barclay's: not a great home for my savings! at 11:43 No comments:

A further example of the close relationship between the bank and Threadneedle, in fact Barclays holds 20% of the total equity raised. Threadneedle has an 'exclusive arrangement with Barclays Wealth', 'already has deals lined up' and sees opportunities in retail...
Threadneedle have confirmed ownership of the properties but have declined to comment further on their relationship with either Barclays or CBRE or on how they were initially made aware of the pending portfolio sale.
Posted by Barclay's: not a great home for my savings! at 22:08 No comments:

Barclay's: not a great home for my savings (Video)

'Our experience, resources and contacts allow us to select the most appropriate and attractively valued properties for our funds' - quote from Threadneedle's commercial property investment philosophy.

It is our opinion that the bank appointed CBRE, Threadneedle’s 'preferred valuers', to 'attractively' value our portfolio at £6-8 million less than values given by two alternative independent valuers. CBRE was then appointed as Receiver to sell the portfolio to Threadneedle at a very 'attractive' price.

The bank is a close 'contact' of Threadneedle, having given Threadneedle £330 million of 'resources' in the later part of 2009 to 'invest in properties' on its behalf. 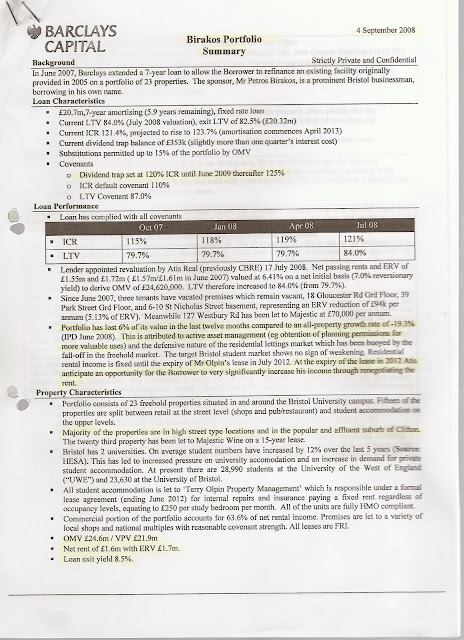 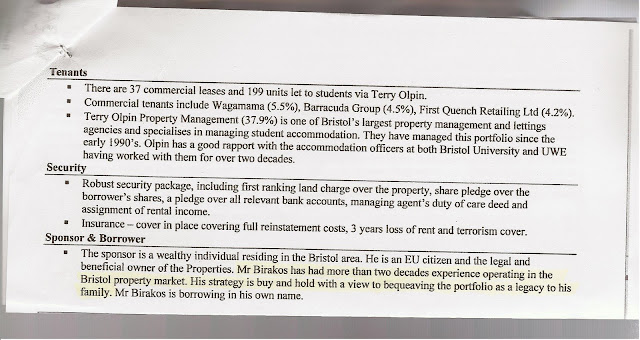 To engineer a default is not easy under normal circumstances however, in the midst of a global economic crisis, it's not hard. I will write about how it's done soon but today I thought I should demonstrate how Barclays Bank went about selling our portfolio within 24hours.

In October 2009 we tried to withdraw £150,000 of our own cash to fund an extension of a vacant unit in central Bristol. According to Knight Frank Commercial Valuers, this would increase the value of the property from £560,000 to £1,240,000 - quite a jump. A tenant was in place, ready to sign a contract once the extension had been agreed.


£420,000 of our own money was sitting in our portfolio account but the bank refused to allow us access, they had no legal right to do this, our contract terms had been fulfilled. This was our surplus cash, overspill from rent after the loan repayments had been met.


Within three weeks there was a turnaround and the bank sent a team of surveyors to visit the whole portfolio on the pretext of 'finding ways to increase the rental income even further'. Unbeknown to us, these surveyors were actually viewing the portfolio and carrying out Due Diligence on behalf of the new purchasers who had been given £330 million by Barclays to purchase property on its behalf. Small world isn't it?

Had our portfolio not been so profitable, it would not have been so appealing to the bank. They would have left it to struggle on as there was no reason to sell; ours was strong, profitable and had a healthy yield, having lost only 6% of its value in the past year compared to an average of -19.3%, so was very tempting to any potential purchaser, especially one with such close links with the bank and all the cash and contacts it needed to purchase quickly and quietly. Easy.

Barclay's: not a great home for my savings!
Bristol, United Kingdom
Our experience with Barclays Capital Mortgages I have four wonderful children and an amazing husband. Our life was perfect until Dec '09 when Barclays bank engineered a default in our loan agreement and turned our lives upside down. We now live on a knife edge, every day is like a rollercoaster ride but we will not give up until we have achieved some form of justice and resolution. Share your views here, especially if you are in a similar position because of bank behaviour?