Barclay's Fundamentals - this is how it all began....

The email you see below is what began a life changing journey for my family from a position of security, stability and happiness to one of anxiety, concern, stress and fear. We had built up a portfolio of 42 individual commercial properties over twenty years. We started with nothing and worked hard to establish a strong and highly profitable portfolio which would support our family and provide long-term security and stability. Barclays Bank provided a loan facility but in 2005 we were advised to transfer the lending over to Barclays Capital which we did.If anyone had told me then that we would be in the postion we find ourselves in today, I would never have believed them; a bank is surely an institution that you can trust, one that is dependable and honest? Not so in my world; Barclays Capital blatantly engineered a default in my husbands loan facility that allowed them to foreclose on the loan one day, appoint Official Receivers the next and sell the day after, at significant undervalue, to a company that had extremely close links to the bank itself . This all happened in less than 48 hours despite the fact that the loan had NEVER been in arrears! 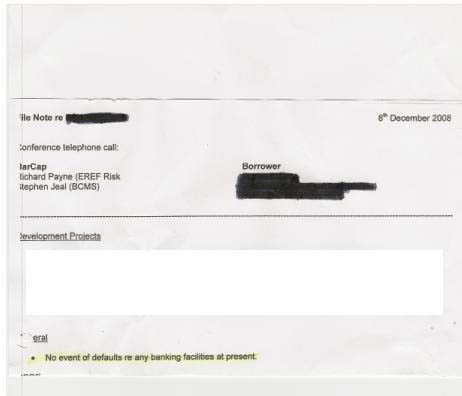 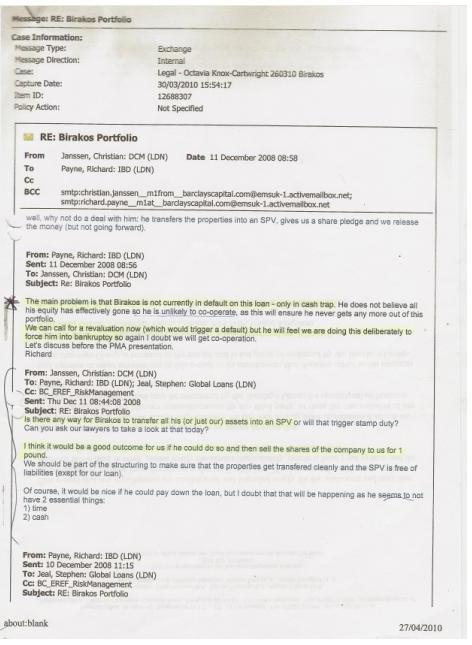 There are several questions I need answers to and below are just a few of them:


We have had several meetings with Barclays officers over the past eleven months, most of which have come to nothing. We have tried to get the officers involved and their superiors to justify their actions and explain the reasons behind them to no avail.

I am angered that our government offers no support structure  for people in our position? We could complain to the FSA but have been told that, if they did initiate an investigation, we would never know the outcome. Surely this is wrong, we should have the right to know what decisions are made by institutions that are funded by the tax-payer. Does this not allow the banks to pillage small businesses safe in the knowledge that their actions will never be disclosed and the likelihood of any public repercussion is minimal?
We could go to court, and have every intention of doing so but, should my husband be declared bankrupt prior to the end of the trial, the whole case will fall due to his financial position. This is probably what the bank is waiting for, no cash...no case. The bank, fully aware of individuals/companies financial circumstances, behaves in an immoral or illegal manner and can do so, safe in the knowledge that there will be no repercussions as they have left their victims with debt, no income and no choice but to declare themselves bankrupt which then robs them of any right to persue legal action.

Barclays Bank may have its own 'Code of Conduct'  but it appears to be more of a PR Tool than something that its staff respect and follow.

I would like to hear from other small businesses who have been left in a similar position.

This blog  is my way of putting this in the public domain as I want to know the public opinion....legally, a judge has yet to decide but ethically, we must be right.

I will be updating this blog and adding further details regularly and look forward to hearing your thoughts, opinions and experiences.
Posted by Barclay's: not a great home for my savings! at 11:20

Barclay's: not a great home for my savings!
Bristol, United Kingdom
Our experience with Barclays Capital Mortgages I have four wonderful children and an amazing husband. Our life was perfect until Dec '09 when Barclays bank engineered a default in our loan agreement and turned our lives upside down. We now live on a knife edge, every day is like a rollercoaster ride but we will not give up until we have achieved some form of justice and resolution. Share your views here, especially if you are in a similar position because of bank behaviour?